There comes a time in all our lives when we must face ‘Change and Resistance’.
With growing maturity and self-assurance, VinNatur 2019 has faced up and grabbed both by the proverbial horns.

As a 16 year old teenager, 2019 saw this progressive natural winemakers association take the brave decision TO LEAVE HOME. Home for 15 years had been the charming Villa Favorita just outside Vicenza in the region of Veneto, northeast Italy. Life was good there. But inevitably, as we grow, change becomes unavoidable. The joy and the pain of it. The joy of creation and birth, the building of a dream, the realisation of a vision and the pain of having to shed old skin and take on a new form.

MAGRAF ‘Marble’ Showrooms, just off the A4 Venezia to Milano motorway, is VinNatur’s new home and what an immense transformation it has been.

For what, ‘in kilometres’, may be just a short hop from the old world charisma of Villa Favorita, has infact become a quantum leap into the URBAN streetscape of MAGRAF’s 11 hectare rock & stone warehouse in Gambellara.

Without doubt, a courageous move. And if we are only to speak in terms of access, parking, floor space, head space, lighting and all support services, hands down VinNatur’s new residence is a winner alright. In a quirky city-style grid, with the tasting tables assembled amidst huge slabs of stunning polished marble, visitors are presented with a series of natural avenues down which strolling, tasting and chat happens with comfort and ease. With limitless space available and no constraints on imagination, one needn’t stretch to begin envisioning the evolutionary potential that this location can offer.

Embracing real change has been a multi-story endeavour for the associations team.

In has come the new event title VinNatur Tasting, the new bi-annual VinNatur Magazine and most encouraging, the exciting news of increasingly far-reaching Research Programs including collaborations with Universities and independent scientific bodies in the study of Agronomy, Biology, Botany and Entomology.

As the associations founder, Angiolino Maule, puts it, when it comes to natural winemaking “it’s no longer sufficient for members to SAY what they’re doing, they now must be willing and able to DEMONSTRATE it too.” To this end, the revised association charter has been published and pilot projects are on-going in the area of independent Qualitative Certification for all association members. Already in motion is a ground breaking program involving the analysis of members wines for any chemical pesticide residues. From the outside, some industry eyes might view this as an overbearing control. But Maule pulls no punches, “We have a responsibility to the protect the living soil, not to mention ourselves and the consumer.”

For more than a century, chemical herbicides and pesticides, together with sulphur and copper based treatments [to combat mildews & fungal disease], have had a catastrophic impact on the health of European vineyards. And the knock on effect in terms of human health can no longer be ignored. Indeed, when looking to the future, Maule and VinNatur members now see it as a noble objective to remove as much sulphur as possible from their activity, both in the vineyard and cellar.

And here is where we naturally meet Resistance.

In one of the weekends most active debates, Stefano Zaninotti, Agronomist at Vitenova Vine Wellness, chaired a lively interaction on the merits of planting natural, cross-bred PIWI grapes, whose fungus resistance makes them a front runner in the race to reduce copper & sulphur treatments in the yard. On hand to recount their own direct experience were two Italian winemakers, Maurizio Donadi and Thomas Niedermayr, who craft many of their wines from PIWI varieties like Solaris, Bronner and Souvignier Gris. While all present agreed there’s no escaping the necessity for agriculture to manage crops and soil in a truly life-supporting way, some in attendance were clearly unconvinced by the qualitative potential of the PIWI vines. People obviously fearful of having to give up their favourite varietals and blends. But the knee jerk reaction should not be to simply label and corral ‘the lesser known’ without a fair hearing and due review. Future lives are inextricably linked to the result of our current actions.

The dichotomy of views expressed was intriguing.

So I later sought the opportunity to taste across Thomas Niedermayr’s complete range, where beyond doubt, I experienced Quality, Charm and Excitement. His wines have no shortage of feeling. As Thomas himself explained, working with the PIWI varieties has been a very steep learning curve. Little is known and much of the experimental work has involved hand selecting in the vineyard, growing from seed, plant by plant, to identify the best performing / most resistant vines.

As Niedermayr says himself, “it’s not that funghi don’t attack PIWI vines, they do. It’s just that these resistant bred plants have developed a natural way to isolate the fungus to its point of attack, to starve the fungus of nutrients and thereby ultimately to allow the plant to survive and thrive.” All with little or no further intervention or treatment in the yard. He asks, “Isn’t it better to live and work in a way that respects and doesn’t contaminate the environment?” Who on earth could disagree with him? Responsibility rests with each of us.

He joined VinNatur consultant oenologist, Franco Giascosa in leading the line on talks about ‘The role of skin maceration in today’s wine world.’ For Simon, the variances in terminology, that stretch from skin contact to macerated whites, still play into the hands of consumer confusion about what it really means to be an Orange wine. Indeed it’s the ‘Orange’ descriptor that for him remains the best catch-all for this category. And to be classified as an Orange wine, Simon says the wine must be ‘actively fermented’ on the skins. So hear this folks, the ’24hr cold soak’ don’t count on the WMS (Woolf Maceration Scale). Wines have got to be fermenting on their skins to make the ‘Orange’ grade. In tandem with discussions, VinNatur organised a neat tasting of 4 member wines that fit the bill (see photo below). 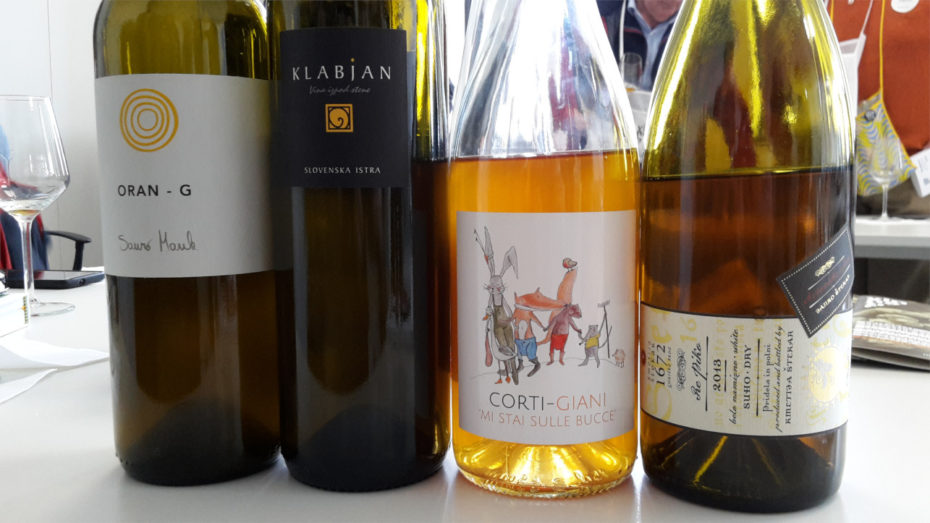 And there were many delicious wines, ‘Oranges’ included, to be tasted throughout the 3 day event.

In total some 180+ members graced the 16th edition of VinNatur, which took place over 3 days from 6-8 April. From certified Organic, Biologic and Biodynamic producers, the Quality of natural wines poured across the tasting tables was wonderfully high. With our two days split between tasting, conference duties and informal “book selling spell” for the aforementioned Mr. Woolf (Lol), as always happens we didn’t have the opportunity to taste as much as planned. But there are a few notables for which special shout-outs are merited:

From the outside, to any who may still be an ‘as yet unconverted’ mainstream thinker, VinNatur may seem to be a House of Utopian Ideals. But allow yourself to step inside and you’ll encounter a curious, spontaneous, natural habitat where the concepts of change and resistance are embraced with equal and positive measure.

Cari amici, there comes a moment in every life when one needs to build a new state of mind, to face and embrace the fact that… THERE IS a better way to Create, Learn and Grow…

…whose self-stated aim is to create and share the culture, experience and practical knowledge they’ve acquired about natural wine, viticulture and vinification during the past 16 years… not to mention for all the years to come :)

CHANGE IT ALL – HARRISON STORM